Bring on the orders!

We went out with flyers to the shops on Mejlgade, Graven and Studsgade yesterday and were met with an overwhelmingly positive response!

We'll be returning on the 19th of March to take the final orders for the boxes, after which we will begin propagating all the seeds!

A group of wonderful KaosPilots, who were working on a project trying to reach out to the local community, joined in with the Adopt-A-Box campaign and made a couple of prototype boxes filled with daffodils. The two boxes were later adopted by Jeremy's and Sander Jensen, both of Mejlgade. 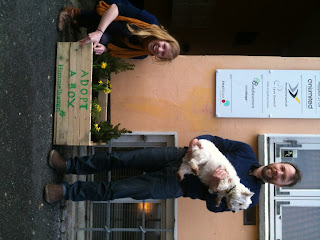 These boxes will hopefully prepare the people of the Latin Quarter for the boxes and take the brunt of any drunk-related action!!