First of all, the boxes have now been out on the streets for 3 weeks! 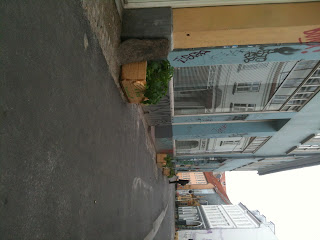 So far 3 boxes have been taken. One from RisRas, one from Mindshape and one from Svineriet. This is very unfortunate as it seems that people have been taking "adopt a box" rather too literally... However, we have now put little signs on the boxes saying who they belong to and so hopefully it won't happen again in the future - they do weigh an absolute tonne!
The past couple of weeks we have been blessed with gorgeous weather which means that most of the plants have grown huge! The Swiss chard especially is looking really impressive and the nasturtiums and cornflowers have started blossoming.

However, this weekend hasn't been a brilliant one. For you those not living in Denmark or those with no interest in football whatsoever - Denmark beat the Netherlands in the first round of the European Championship. Whilst this is no doubt excellent news for Denmark, it hasn't been great for the boxes. It seems that a group of people "celebrating" the victory (or a couple of particularly upset Dutchmen) have decided to practise a bit of football themselves and have destroyed the contents of quite a few boxes and pretty violently smashed in the beautiful potato and marigold box that stood on the corner by Jeremy's Bakery. It's a real shame and something that we had hoped wouldn't happen.

We had a few plants leftover so we have tried to top up the boxes and tidy them up a bit. If anyone has some grand ideas about how to deter hooligans - do let us know!

Most of the boxes have been untouched, especially the ones in people's backyards but it's just such a shame. 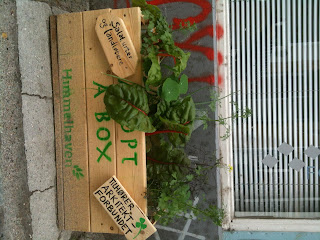 If anyone has any plants that they would like to donate to the project, we are very grateful! One person has already planted a rose in one of the upturned boxes - it's wonderful to know that people in the local area are following the project and want to help it survive. We just need to get to the end of August and then we can eat the plants!


Everyone is welcome to join in - just stay tuned for plans and when and where to be. The idea is that we eat all together so the contents of the boxes are not to be picked at yet.

Hope you have all had a nice weekend,
Let's hope that the next few weeks of football aren't quite so aggressive!