Adopt-A-Box is a project run by Himmelhaven that aims to cultivate the city centre by bringing edible plants into an urban setting.

Starting in the Latin Quarter of Aarhus in 2012, Adopt-A-Box hopes to both decorate and provide food (for thought) for the people that use the area.


In 2012 there were three different boxes: 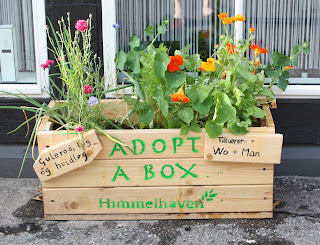 In 2013 we have expanded our production and are offering 5 box combinations. These can be ordered until the 17th of March and cost 200kr.

The idea is that local businesses, cafés, residents etc adopt a box and give it a place to live on their doorstep, water the plants through the summer months and finally, reap the rewards at a community harvest in the autumn. In return, the boxes will beautify the streets of the Latin Quarter and hopefully, give a sweet little something for the birds and the bees.

The boxes that stood on the street during the summer had been adopted by local businesses and cafés. The plants in the boxes get planted in the middle of March in order to let them grow to a decent size before releasing them into the big wide world. From March until mid May they grow strong in the windowsills and backyards of the Adopt-A-Box team as well as at Adopt A Box HQ at Institut for (X).

The seeds and bulbs have come from a variety of places. The marigold seeds were donated by Camilla Plum, the salad and carrot seeds from Solsikkens Økologiske verden, the garlic cloves from Klosterport Frugt og Grønt and some seeds came from our very own mothers!

There is nothing easier than growing your own food, and nothing more delicious than doing so!

Let's get cracking and plant some veggies!

Throughout the project we have received kind support from Frontløberne who hosted us, Jeremys Brød and SmallGiant Communications who hosted the prototype boxes, Kaospilot 1st year students, WorldPerfect who donated the stonepaper from which we made the stencil, Camilla Plum for her kind donation of organic seeds, Bygma for their nails, Jan from the harbour for his donation of wood. So far in 2013 we would like to thank Great Coffee for their coffee grounds which we're using to spice up our soil with nitrogen, to Insitut for (X) that have been so kind as to host us and our meetings, to Helledige Islandsheste for their very kind donation of quality Icelandic horse manure and to Hvidløg og Vin for their generous discount on fantastic garlic cloves that we already planted in October last year.Also much thanks goes to all the kind adoptive parent for their donations at the harvest tapas!

Thankyou very much for all your generous support! 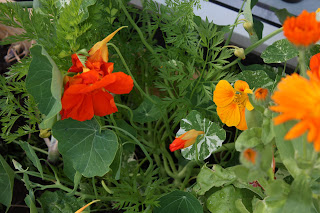