A delicious and oh-so local feast

Just over two weeks ago we held the grand finale of the Adopt-A-Box project. 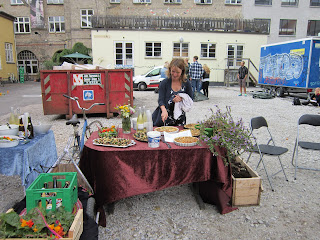 We harvested all the goodies that have been grown on the pavements of Mejlgade and Graven in the centre of Aarhus and were surprised at just how much there was above and beneath the soil! 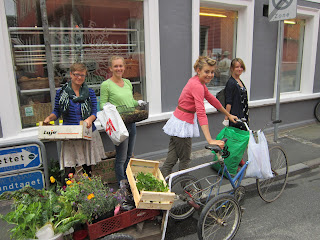 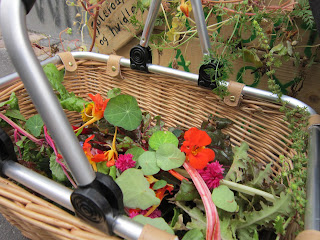 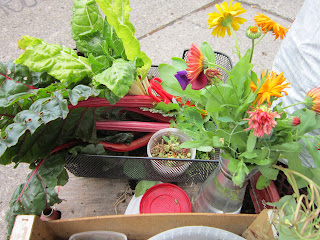 The vegetable that we are (probably) most proud of is a single green pepper, grown by Sander Jensen of SmallGiant Communications. This hardy little fellow made it through rain and shine and has survived 2 months on one of Aarhus' busiest streets - Mejlgade. Behold its glory! 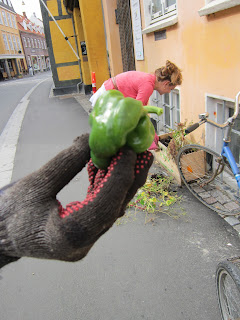 All the potato boxes, even the ones that had their leaves ripped off during the summer, had a decent crop. The potatoes were pretty small but perfectly formed and not suffering from any diseases or fungus. We used two different kinds which meant that we both had some bright red and some regular new potatoes. 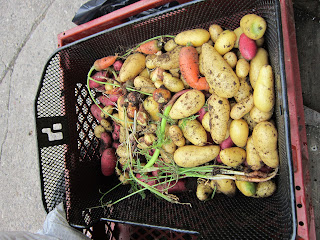 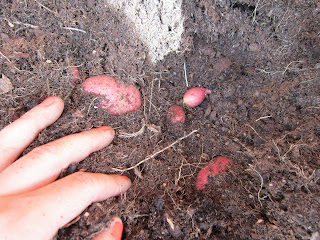 Beside the potatoes, we had a pretty spectacular crop of Swiss Chard, which has by far been the most visible and the easiest vegetable we have grown - and so rewarding! I have noticed that Swiss Chard is often used in plant boxes and in community gardens and I can only presume that it is because of its size and stunning appearance. 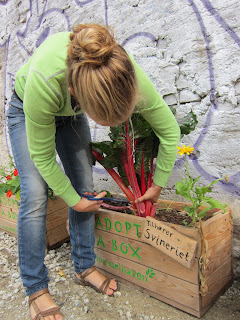 It's not a vegetable that you often find in the supermarket which means that it takes a bit of imagination to decide how to cook it. We used some of the less exposed Swiss Chard (less potential for wee wee) for a salad and thoroughly rinsed and fried up the rest and made it into a pie. The pie, with Swiss Chard, goats cheese and pine nuts tasted absolutely incredible! A bit like a mixture between beetroot and kale. 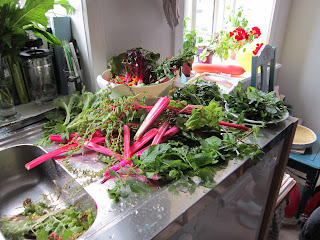 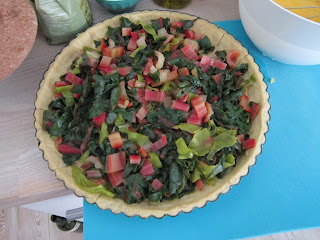 We didn't have much luck with the carrots, which was half expected. They were very difficult to propagate despite the ingenious use of toilet rolls and they were also very difficult to transfer meaning that many of the fragile roots were disturbed in the process of planting them out. We did however manage to get a few beautiful cherubim-like ones which we scrubbed clean and sliced into the flower and leaf salad. 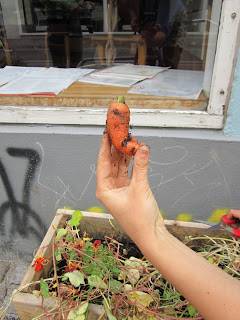 Most of the salad heads were wilted by the time of the harvest. Salad requires frequent, large amounts of watering which has been difficult to provide over the summer, especially seeing as a lot of the box parents went on holiday, next year maybe spinach will be a better alternative. We decided not to eat the few surviving salad heads - we judged it to a bit too risky in terms of drunken encounters... 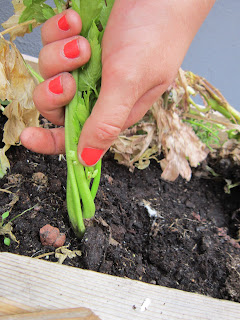 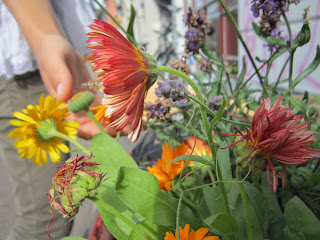 With kind donations from Karlbak, OliNico, Skt. Oluf, RisRas, Jeremys Brød, New Age Shop, Arkitektforbundet, Svineriet and SmallGiant Communications we put together a harvest feast and bid the residents of the Latin Quarter welcome to send Adopt-A-Box 2012 off with a bang. 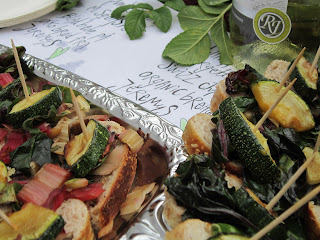 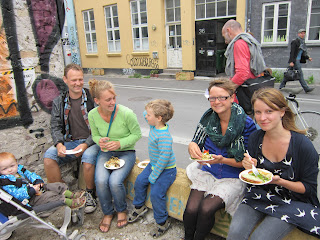 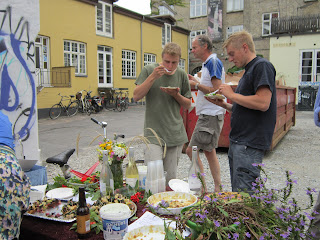 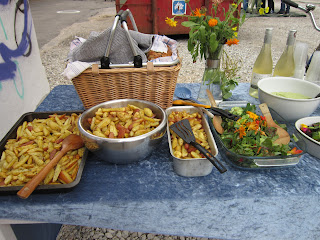 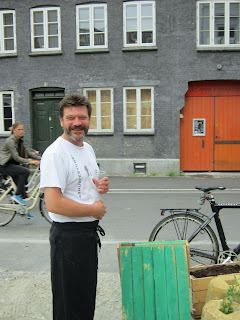 We would like to say a great big thanks to everyone that gave a hand during the harvesting and the feast preparations - we could not have done it without your help! Also a really big thanks to everyone that has been involved during the 3 months that the boxes were on the street. We have learned a lot of things from this year's project and are bursting with ideas for next year! 'Like' our Facebook page to keep up to date with what's happening with Adopt-A-Box!